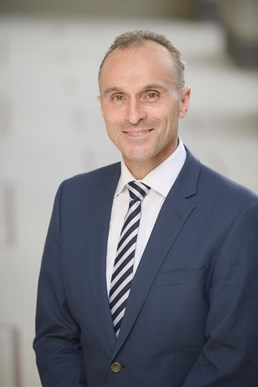 Many of our William Adams’ family have got to know Eddy Kontelj, our Managing Director over his period of almost twenty years with the business.

Some, however, may be unaware of the significant role he plays within his community outside of William Adams.

Eddy’s parents fled a war torn country to build a better life for their children in Geelong, and other than postings interstate and overseas as Eddy gained experience in the earthmoving and mining industry, Geelong has been home for Eddy and his family.

Born, raised and educated in Geelong, his passion for Geelong and the region runs deep. Eddy’s family has an extremely strong and long standing connection to Geelong. Having previously represented the people of Geelong as a City of Greater Geelong Councillor between 2010 – 2016, and being a husband and father to three daughters, he has a genuine interest in community and the Geelong environment.

In addition to his role as Managing Director, and City of Greater Geelong Councillor, Eddy is also the Honorary Consul for the Republic of Slovenia – Victoria.

Affordable and flexible parking options in the Central Business District (CBD), particularly around city hospitals, and hard waste collection solutions are just two of the initiatives he will be advocating to identify and implement whilst in office.

“Delivery of efficient and effective services to minimise community financial burden will also be a priority in order to continue to invest in vital infrastructure and to actively help and support valuable organisations that represent the best interest of our community, youth, families, our precious elderly, sporting clubs and our respected military veterans”, said Councillor Kontelj.

Eddy tells us that being elected a Councillor to the City of Greater Geelong Council and having the ability to give back to his community and region, is the ultimate privilege and honour. “Our potential and ambitions should only be limited by our imagination” said Eddy Kontelj, who also manages to squeeze in time to train for, and compete in long distance half Ironman distance events, comprising of a 1.9k swim, 90k cycle leg, and half marathon run leg (21k).