50th Anniversary of the Cat D5 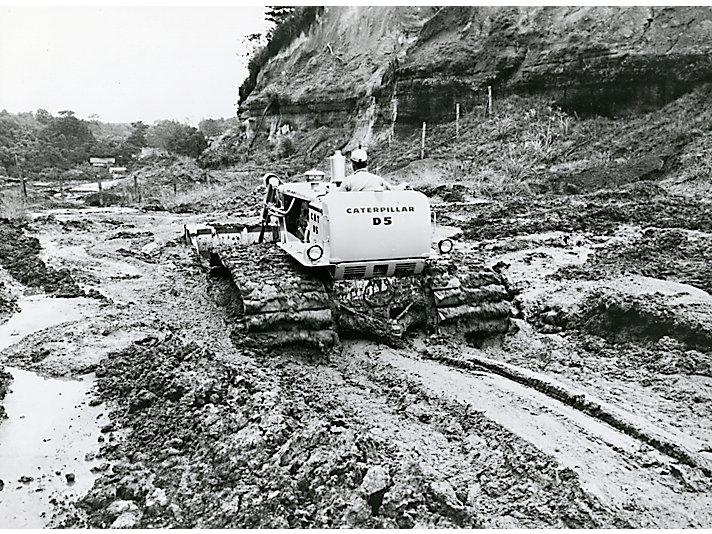 Three Years of Design and Testing

A new product doesn't just "happen." It's the result of the combined efforts of many Caterpillar people.  The D5 Tractor—introduced Feb. 1, 1967 — is a perfect example of this truth.

Its development started in October, 1963. Engineers at the East Peoria Plant were tasked with designing a tractor to replace the D6B.  "The main goal was to provide a power shift transmission in this medium-sized tractor," said Andy Heisel, former general supervising engineer of Track-Type Tractor Design. "Horsepower was to remain unchanged, and total tractor weight was to stay substantially the same.  Serviceability and operator controls were to be improved.  All goals were to be achieved with a minimum of cost increase."

In January 1964, a project description sheet was issued and the new tractor officially became Project 755.  Supervising Engineer Fred Simpson was assigned overall responsibility. Len Hanson was designated project coordinator.  He would stay with the project until it was completed and the new tractor was in production.

East Peoria Engineering started the design work. As the project developed, hundreds of people in many departments became involved.

"More than 600 new parts were required," said Heisel. "Each new part had to be detailed by draftsmen. East Peoria and General Offices Engineering people reviewed the project periodically. Improvements were incorporated into the machine all along the line."

The efforts of many people bore fruit in June, 1965, when Research Manufacturing built two of the new tractors—one with power shift and one with direct drive.

In April, 1966, the power shift version went to the Arizona Proving Ground for further testing. Final modifications were made in July. Then the tractor was sent to Tennessee for 2-1/2 months of field testing by contractors. Field Research followed its performance closely.

Meanwhile, the second tractor was running endurance tests at the Peoria Proving Ground.  Now, after almost three years of design and testing, the D5 was ready for production.

People in Tooling worked out tooling requirements. People in the Tool Room built new jigs and fixtures. On Nov. 1, employees started producing parts for the new tractor. Components come from almost every building at East Peoria Plant. Joliet Plant supplied the hydraulics and its related products.

Parts were combined into subassemblies. On Dec. 22 the first pilot model of the D5 came down the assembly line in Building X.  Another followed within a few days.

Quality Assurance people took one of the tractors to the Edwards Sales Demonstration Area for still further checks to ensure its quality.

Production started on a regular basis Jan. 3. The D5 joined the D4D, the D6C, the D7E, the D8H and the D9G in Caterpillar's line of quality track-type tractors. "The D5 is an excellent tractor," Heisel said. "The skill and know-how of hundreds of Caterpillar people went into developing this machine and bringing it into production.  Each employee can take pride in this achievement."