CAT® Trucks pick up the pace

CAT® TRUCKS PICK UP THE PACE 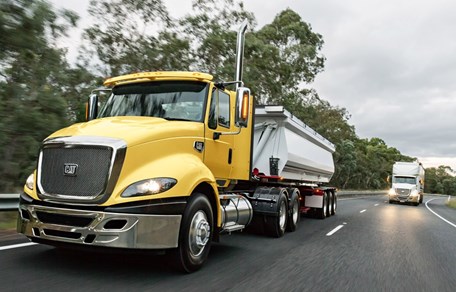 Powerful presentations by Cat® Trucks at premier Australian truck shows in Brisbane and Perth over the past few months have dramatically highlighted the brand’s remarkable evolution since first appearing on the Australian market less than five years ago.

The world’s first Cat-branded on-highway trucks were launched to Australian operators in late 2010 with just two foundation models, the CT610 and CT630, providing the initial platform.

However, with bold product plans progressively implemented by a tight-knit group of dedicated engineering and marketing professionals, Cat Trucks now boasts a model range capable of roles from rigid delivery duties through to roadtrain triples.

“Given the pace of development, we sometimes need to remind ourselves just how far Cat Trucks has come in a relatively short time,” says Glen Sharman, Navistar Auspac’s Director of Sales, Marketing and Business Development for Cat Trucks.

Speaking at the recent Perth Truck Show where the new triples-rated Cat CT630HD model followed its stunning Brisbane debut with a tremendous response from West Australian operators, a reflective Glen Sharman said, “I’ve been extremely fortunate to be involved with Cat Trucks from the start".

“Of course, there have been challenges but the end result of creating an increasingly strong presence in markets as fiercely competitive as Australia and New Zealand is a great testament to both the dedication of the people and the durability of the products.”

The Cat Trucks model range today sports the spacious CT630LS, the CT630S and CT630SC which are engineered with a shortened bumper to back-of-cab dimension to ideally suit B-double applications, and the new CT630HD with a gross combination mass rating up to 130 tonnes. Meantime, the 13 litre CT610 continues to establish an enviable reputation for fuel efficiency in a wide range of applications from truck and dog trailer work to shorthaul and regional semi-trailer tasks.

“We are a small team compared to most of our competitors and working alongside the Cat Trucks dealer group makes us extremely proud of how far the brand has come in just five years,” Glen Sharman continues.

“It has been a great journey to this point but we are still on the road to achieving the true potential of Cat Trucks.

“In sales terms, our original expectations of where we would be in five years have not been fulfilled, due largely to the simple facts that Australia and New Zealand are highly competitive markets crowded with brands from around the world. It’s a tough business.

“Still, no one should doubt the commitment and confidence that exists within Cat Trucks and its dealers around the country to grow the business,” he emphasises.

“We are here for the long haul and while recent events here and abroad have caused some competitors and commentators to suggest that the effort and energy behind Cat Trucks is waning, nothing could be further from the truth.

“It is a suggestion that is mistaken and extremely naïve.” 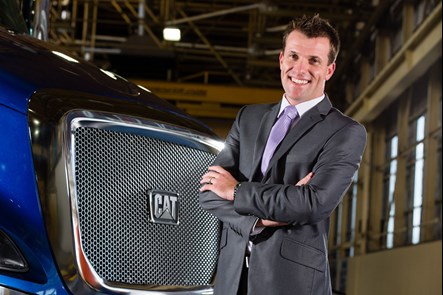 Glen Sharman cites the formation in 2014 of Navistar Auspac as a fully factory-backed division of giant US truck and engine builder Navistar Inc, and substantial investment in the development of models specifically for the Australian and New Zealand markets as blatant proof of the commitment behind the Cat Trucks business.

Similarly, suggestions of a limited future for the supremely durable and much admired Cat C15 engine which powers the CT630 range are equally inaccurate. Recent statements by senior Caterpillar executives in the US indicate that development of a next generation 15 litre engine is well underway while the Cat CT610 model will continue to enjoy the advanced fuel efficiency and emissions compliance of the Navistar designed and built CT13 engine.

“There are so many positives surrounding the future of Cat Trucks,” says Glen Sharman, “not least many customers now replacing their first Cats with new units. That’s incredibly important because it shows we’re not only delivering a truck that satisfies operational demands but Cat Trucks dealers are also satisfying customers’ expectations of service and support.

“Dealer commitment is vital for the success of any brand and we are constantly encouraged by our dealers’ ongoing investment in the people and support structures for Cat Trucks.

“In the truck business you simply can’t overstate the value of a national dealer group that understands and appreciates the DNA of a product as thoroughly as the Cat Trucks network. There are few who could match it.”

“Add these events to increasing dealer investment in new tooling, workshop upgrades and parts inventories, and it’s easy to see that confidence and commitment in the future of Cat Trucks certainly aren’t lacking on the front line between dealers and customers.

“It has been a dynamic five years but no one should be in any doubt, the next five years will be even more dynamic. The best is still to come,” concludes Glen Sharman.